Performer, recording artist and writer with expertise in the field of Jean Sibelius’ solo piano works and as a renowned duo pianist, Joseph plans to extend his series of Sibelius recordings through a collaboration with the violinist Fenella Humphreys for Resonus Classics in 2020. A third volume of piano works is planned for 2021 on the Quartz label. The premiere of a new work for piano duet by Edwin Roxburgh with Piano 4 Hands and a new commission of solo piano pieces from David Matthews both promise to be exciting and hugely rewarding projects over the next two seasons.

In addition to teaching at Wells Cathedral School and acting as piano coordinator at Wells International Summer School, Joseph Tong is also an accredited music adjudicator for the British and International Federation of Festivals.

A versatile and imaginative pianist, much in demand as a soloist, duo pianist and chamber musician, Joseph Tong enjoys a busy and varied career giving regular performances at concert venues and festivals throughout the UK and abroad whilst producing critically acclaimed new recordings reflecting his musical interests and passions. He also pioneers new music for piano duo through commissioning and collaborating regularly with contemporary composers. Joseph Tong has performed at Wigmore Hall, the South Bank Centre, Fairfield Halls, St David’s Hall Cardiff and has recently given recitals at the Sendesaal in Bremen and St Blasien in Germany as well as in Spain.

His keen interest in the piano music of Sibelius has seen two discs released so far on the Quartz label to widespread critical acclaim. He regularly tours in Finland and has given recitals at Ainola, the composer’s home, the Sibelius Piano Marathon at the 2019 Korpo Sibelius Festival, the Sibelius Museum in Turku, Helsinki Music Centre (Camerata Hall) and Hämeenlinna Town Hall, the composer’s birthplace town. Future plans include new recordings of Jean Sibelius violin and piano works with Fenella Humphreys and a third volume of solo piano works. 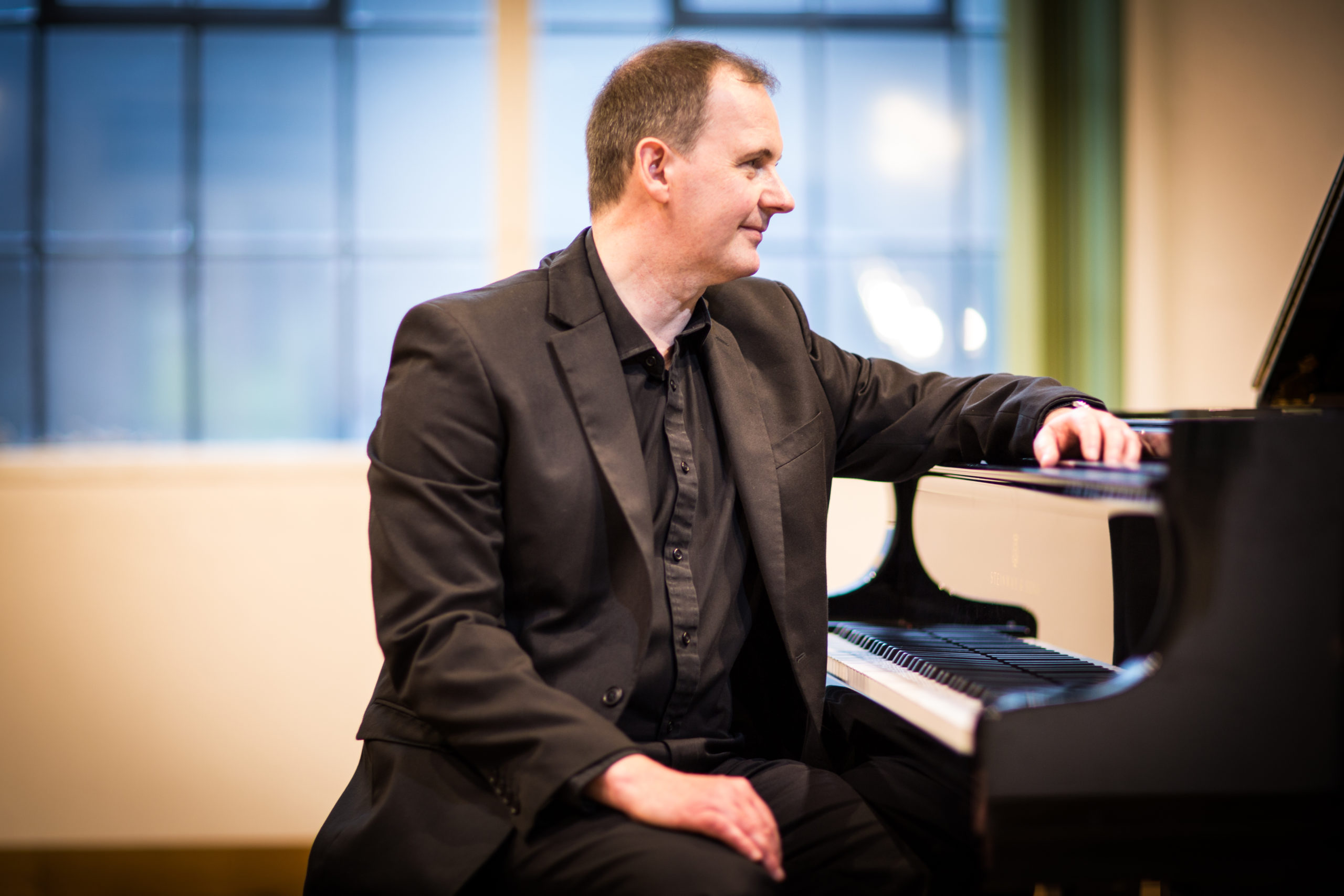 Joseph studied with Hilary Coates at Wells Cathedral School and Christopher Elton at the Royal Academy of Music, after reading music at Christ’s College, University of Cambridge. He also studied privately with Piers Lane. He won the Maisie Lewis Young Artists Award in 1996 which led to a Wigmore Hall recital debut the following year.

Joseph Tong has broadcast live in the In Tune studio for BBC Radio 3 ahead of his first St John’s Smith Square all-Sibelius recital in London in 2015, marking the composer’s 150th anniversary and the release of his first album of Sibelius piano works. His interpretative insight into this large body of relatively neglected repertoire saw a second volume released two years later, further invitations to perform in Finland and the rare opportunity to join Folke Gräsbeck and four other Finnish pianists for a Sibelius Piano Marathon at the Korpo Sibelius Festival in July 2019 which was recorded for later broadcast on Swedish YLE radio.

Other highlights have included recitals at the 2018 Presteigne Festival where he gave the World Première of a new work by Cydonie Banting alongside contemporary works by Huw Watkins and David Matthews as well as at St David’s Hall Cardiff, the Guildford International Festival, Cedars Hall in Wells and the Jacqueline du Pré Music Building in Oxford.

Joseph also pursued his long-standing admiration and love for Robert Schumann’s music with a visit to Leipzig and Zwickau followed by a highly acclaimed recording for Quartz in 2019 which received excellent reviews in BBC Music Magazine, the Sunday Times, Musical Opinion Quarterly and other publications. Joseph’s discography also includes a series of recordings of piano duo works with Waka Hasegawa (see Piano 4 Hands.)

He also has as successful parallel career in the piano duo Piano 4 Hands with the Japanese pianist Waka Hasegawa, much in demand as one of the UK’s leading piano duos. They perform regularly in recitals at Wigmore Hall, Bridgewater Hall Manchester, St George’s Bristol, The Lighthouse Poole and major UK festivals including Buxton, York, Guildford, Oundle and Presteigne.

The duo has also appeared at the Cheltenham Music Festival three times since 2010, co-commissioning new works by Dai Fujikura, Daniel Kidane and David Matthews, Nicola LeFanu, Rob Keeley, Edwin Roxburgh and the late John McCabe, giving their premieres at Wigmore Hall and the Purcell Room in London. Their latest project is a new commission from Edwin Roxburgh for the 2020-21 season.

Piano 4 Hands has made a series of critically acclaimed CD recordings on the Quartz label of Debussy, Schubert and John McCabe.

As a chamber musician, Joseph has taken part in concerts and study sessions with the musicologist and broadcaster Richard Wigmore as part of his ongoing Music Discovery Live series in Oxford, teaming up with his brother Daniel Tong, and violinist Sara Trickey.

Joseph has also been a regular performer at the Wye Valley Chamber Music Festival since its inception in 2000. He is also a member of the New Street Ensemble with Marie Lloyd (clarinet), Simon Smith (violin) and Penny Driver (cello).

Joseph also has a regular piano duet partnership with his brother Daniel, appearing together at the Purcell Room in London in a performance of Schubert’s Fantasy in F minor and playing Stravinsky’s The Rite of Spring as part of the ballet’s centenary celebrations held at St Hilda’s College, Oxford in 2013 in the presence of Dame Monica Mason.

As a result of their shared interest in the music of Sibelius, Joseph will be collaborating with the British violinist Fenella Humphreys on a recording of Sibelius’s violin and piano works, generously supported by Sibelius One, in Cedars Hall, Wells followed by a series of recitals in 2021.

Joseph Tong was elected an Associate of the Royal Academy of Music (ARAM) in 2008 and is one of the senior piano tutors at Wells Cathedral School. Joseph also holds teaching and accompaniment posts at two all-Steinway schools in London, and is regularly invited to adjudicate and give classes at conservatoires and junior colleges.

Joseph Tong is the founder and co-director of the Bristol International Piano Duo Festival (2008-2017), held biennially at St George’s Bristol and the University of Bristol.

He is currently a music adjudicator for the British and International Federation of Festivals (BIFF).

Future projects include a unique collaboration with the Sibelius Museum in Turku on their upcoming new exhibition on Jean Sibelius and a new recording project for the third volume of Sibelius piano works at the museum in 2021. Joseph is also looking forward to recording Sibelius violin and piano works as well as pursuing his interest in the music of Robert Schumann and Edvard Grieg, concerts with Piano 4 Hands and the Bath Camerata performing the Brahms German Requiem, and solo recitals in Germany, Spain and Finland. Joseph is excited to be commissioning a new set of pieces from David Matthews, to be performed alongside Sibelius’s ‘The Trees’ in 2021.